How FSCS is helping to prevent future failures

We are collaborating with the FCA and industry to tackle phoenixing

It’s often a surprise when people learn that FSCS does more than pay compensation. Getting our customers back on track and promoting financial stability is always our priority, but we’re also working hard to support the four pillars of our strategy: prepare, protect, promote and prevent.

Our aim for ‘prevent’ is to collaborate with the Financial Conduct Authority (FCA) and industry to help prevent firms failing and to look towards reducing future compensation costs. We aim to spot where there may be problems in the market and look at how we can work with the FCA to tackle issues.

FSCS doesn’t have any supervision or enforcement powers, but our research and guidance can help the FCA and other authorities, such as the Insolvency Service, to investigate behaviour that may be against the interest of consumers and levy payers.

Phoenixing is where someone, usually a company director, escapes from the liabilities in one company by setting up another. The director (or a group of directors) moves any assets from the previous company to the new one, but not its liabilities or debts. This is where the name comes from, as the old company ‘rises like a phoenix’ from the remains of the original firm.

The biggest challenge with phoenixing is that it’s not illegal. However, sometimes there may be a breach of industry rules which means action can be taken against the people involved. FSCS has long been suspicious of phoenixing but finding enough evidence and reliable data to share our suspicions with the regulators has been tricky.

Our first question was: where do we start? What information do we have and what more do we need to build a picture of suspected phoenixers?

Our claims handlers were the sensible starting point, as they see the details of claims every day. We worked with them to look at:

To build a picture of phoenixing activity, we worked with Barrachd (now part of Capita Consulting) to combine our claims handlers’ insights with data from Companies House, the Office of National Statistics, the FCA register, the Financial Ombudsman Service, and our own data lab. We had strong support from our Chairman Marshall Bailey and Chief Executive Caroline Rainbird.

The results were fascinating.

Over the course of a year, FSCS discovered two types of phoenixers:

This is where a person phoenixes from one IFA to another IFA and is still in the market offering advice.

This is where a person phoenixes from an IFA into a CMC and claims compensation on behalf of their former customers. Often these CMCs would also take a high commission, resulting in a CMC profiting from us and our levy payers for their own bad advice. In some cases, CMCs appear to be actively recruiting failed IFAs to bring their customer book. 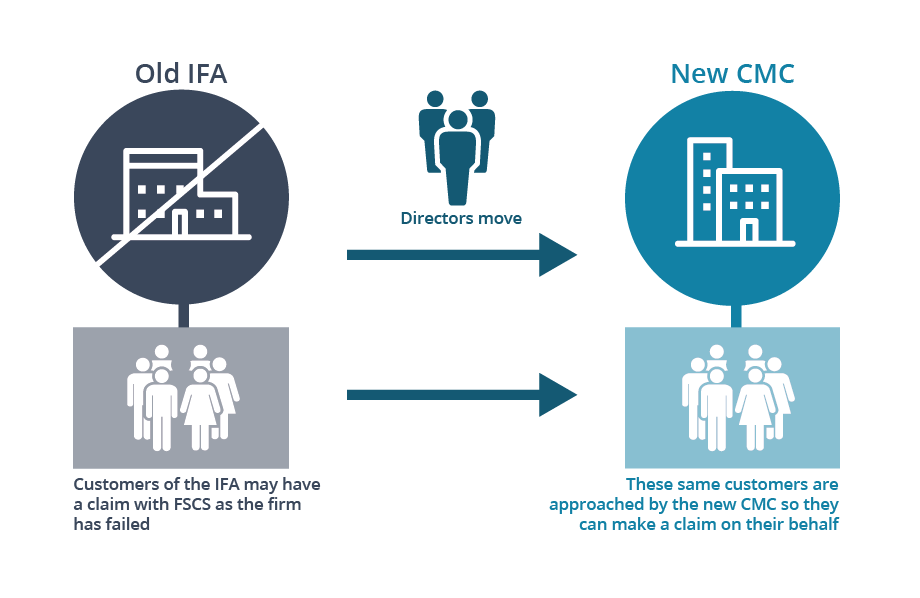 So far, we’ve found a number of examples of both these types of phoenixes and where we have suspicions we share these with the relevant regulatory partner.

Our aim is that these people, if proved, would no longer be able to provide regulated financial services. This would offer protection for consumers looking for financial advice, prevent further harm and avoid further burden on our levy payers.

It’s early days but we have seen some initial good results via the coordination and data sharing we have between the regulatory family. FSCS is a founding member and sits on the FCA-led anti-phoenixing working group along with the Insolvency Service, the Ombudsman Service and the Scottish Accountant in Bankruptcy.

Firms withdraw their applications for FCA authorisation for several reasons; however, FSCS is proud to have contributed where we see potential harm to the consumer and the levy by sharing phoenixing concerns of specific firms or individuals with the FCA. We strongly believe that this has contributed to both financial advice firms and CMCs withdrawing their applications where there would have been a risk of consumer harm.

What’s next for ‘prevent’?

Building on the method we’ve developed to identify suspicious activity, we’ll continue to share information about suspected phoenixers with the regulators. We’re also working to improve how we share data and work with the FCA more generally.

One final area we are looking into is improved and more regular information from FSCS for levy payers. Those on the front line of the market are likely to see things happening that could be harmful to the customer, and by working together we’ll improve the industry for everyone.

Read more about our mission and strategy